The sea is burning.
Family is lost in din.
Your voice is a distant echo
Even as I brush your skin.

But when the stink of oil and death
And the rumble of steel fills the world;
When there is nothing...

When there are no calves and you are alone
Remember then.

Democrats Are Determined to Keep Losing to the GOP 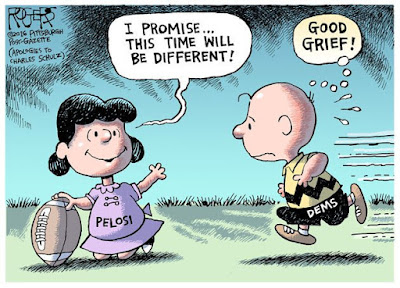 Democrats are stubbornly refusing to understand the message they are being sent by the American electorate. Having lost a presidential election to the least popular presidential candidate in history they are eagerly chugging down their own Kool-Aide. They are blaming the Russians, the FBI, Jill Stein, third party voters, and anyone else they can find without the resources or political cache to publicly defend themselves.

The corporate media, willing to say anything to hide it's collusion in the rise of Trump, is pandering to their every word.

While I personally find these excuses laughable, let's assume for one second that it's all true. All any of this does is explain how Clinton lost the presidential election and conveniently ignores that the Democrats have lost more than a thousand house seats in eight years.

It is clear that the American electorate is fed up with the Democratic party, yet the democrats, with their typical apathy and self righteous certainty in their own wisdom, are refusing to make any changes that might indicate that they are hearing the cries of anger coming even from within their own party ranks. They have chosen, instead, to hold the course and ride out the next four years. They have kept all their party old bosses enthroned certain that the independent voters that swung to trump were somehow fooled by his con. They are certain that after four years of Trump's iconic brand of sheer incompetence these lost sheep will flock back to their corrupt "lesser evil" campaign strategy.

The Democrats are even making noises about running Hillary Clinton again.

As always, the Democrats are underestimating the American voter, and in so doing they are virtually guaranteeing an eight year Trump regime.

The first is that Donald Trump has no intention of keeping any of his campaign promises and has every intention of selling out the middle class to enrich himself and his entourage. This is a fair and reasonable assumption which, for all practical purposes, rather falls into the category of, "No shit, Sherlock."

Their second assumption is that when his voters see this they will be disillusioned making the 2020 race an easy win. They couldn't be more wrong.

The fundamental assumption, that Trump voters are a bunch of idiots who bought into Trumps con is both typical of the neoliberal intellectual superiority complex, and JUST PLAIN WRONG.

The VAST majority of Trumps voters know EXACTLY what Trump is.

They will be neither surprised nor disappointed with the Trump administrations constant blunders and failures. They are counting on it. To most trump voters this election is a thumb in the eye of a political establishment that has failed them, again and again and again and again...

And it seems fairly certain that the same conditions that allowed a jaded and abandoned electorate to troll the entire nation with a Trump administration will still be alive and well in 2020. 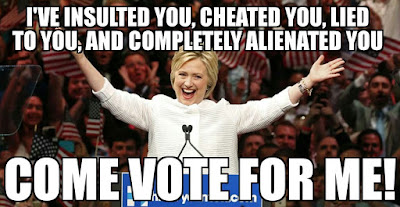 Non-voters did NOT cost Hillary this election. It wasn't third parties or Wikileaks or Comey, either. These dialogs, coming out of the Democratic establishment in order to avoid responsibility for their epic failure to make any meaningful headway at all this election cycle, are complete and utter bullshit. In political commentary we call that "punching down": Blaming the powerless for the failures of the powerful.
HILLARY cost Hillary this election.
What cost Hillary this election was that almost 1 in 10 DEMOCRATS voted for Donald Trump.
That's right. Hillary was such a badly chosen candidate that not only was she completely unable to attract the center, she wasn't even able to unify her own party.
Let's be crystal clear about what just happened. Hillary didn't just fail to inspire Democrats to "get out the vote", although that was certainly a factor. Hillary Clinton actually drove voters across the aisle.It would seem a no-brainer that Hillary was just a bad nominee.
But no. Instead of taking responsibility for the fact that they rigged the primary process over threats of a #DemExit and nominated a candidate with a trending #NeverHillary hashtag, the Democratic establishment is trying to blame people who didn't vote, or voted outside the two party duopoly.
Blaming Jill Stein is stupid. If EVERY Stein voter had voted for Hillary she still would have lost. Gary Johnson is a CONSERVATIVE. If he took votes from anyone it was Donald Trump. Rachel Maddow is in the throws of cognitive dissonance when she suggests half of Gary Johnsons voters would ever vote for Hillary Clinton.

People who don't vote are not the problem. If a person can't be bothered to stay informed, they shouldn't vote. Uninformed voters don't help the Democratic Process.
Besides, in Michigan (where Hillary lost by only 11,000 votes) 90,000 voters filled out their downticket ballot and left the ballot bubbles for President empty. Non-voters were just not the problem.
While the Democratic establishment and their bleating herd of loyalists are struggling with this concept, one undeniable truth is clear as day. They have nobody to blame but themselves.
Most of you have seen the Jonathan Pie video floating around, and SOME few liberals have shown at least a few glimmers of understanding, but most of them STILL haven't taken the real message to heart. They are creating a narrative that the reason they lost is that they didn't try hard enough to persuade.
WRONG.
Yes their unwillingness to communicate with dissenters... driven by an arrogant presumption of their innate moral superiority... was certainly a problem for them. Calling people sexist, or racist, or privileged was, indeed, an outrageously STUPID strategy for persuading people, but that was just the tip of the iceberg.
Their REAL problem was their shitty, war-criminal, corporatist candidate. Trying to "persuade" people wouldn't have changed that.
Listening might have.
If they had listened when #BernieOrBust started to trend... If they had been willing to compromise rather than "persuade"... They would ALL be celebrating today and Donald Trump would be back to his old day job of driving business ventures into the ground.
In the end the Media is going to hide their collusion with what has been, perhaps, one of the most colossal and incompetent failures in US politics since the Civil War by turning this into another variation of their "Bernie Bro" narrative. And they'll succeed. They'll blame Jill Stein or Bernie Sanders the same way they blamed Ralph Nader for 2000. That was a lie then, and it's a lie now, but it will play because they're the mass media and there's nobody around to say otherwise.
But those of us few who are informed and paying attention know better.
The Dems didn't lose this election because people didn't vote. They didn't lose because people voted for Jill Stein. They didn't lose because Bernie was mean to her before the primary.
They didn't lose this election because they didn't persuade.
The Dems lost this election because they refused to BE persuaded and that's 100% their own fault.
Posted by Urk at 12:07 PM 2 comments:

Ain't no "why" once flak and bone fly.
The fog of war. The blinded crowd.
Brassy anthems play out, proud.
Drums beat out the same old call:
"Embrace with us the steel rainfall".

Stars and spangles fade to gray.
Were they colored yesterday?
Once again the wheel comes 'round.
The blood of good men feeds the ground
While with ingenious sleight of hand
Kings and generals make their stand
And with a patriarchal frown
They lock the whole damn kingdom down.

The innocents that we would free
Sleep beneath a symphony
Of missiles and artillery
While an arrogant cacophony
Of procedural propriety
Hides our culpability.

The Laws of Social Dynamics

#OurRevolution is Dead. Progressives Killed It. 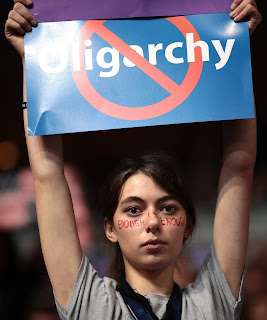 #OurRevolution has doomed itself. By deciding that promoting progressivism is more important than putting a stop to government corruption they have permanently marginalized themselves.


Bernie had a wide range of independents supporting him including libertarians like myself and other disenfranchised conservatives. He even had the support of a number of Republicans. But be clear...
We supported Bernie despite his progressive world view, NOT because of it.


With the appointment of Jeff Weaver as the unelected "President" of the organization #OurRevolution is clearly positioning itself to put itself into debt to big donors, become a part of the corruption that it's pretending to champion against. It has decided to accept systemic corruption in order to promote a progressive agenda.


That is not a movement I have any wish to join.


The Greens are no alternative either. Bernie was a reformer who happened to be a progressive. We could live with that. Jill Stein is a progressive who happens to be a reformer. That's a pretty big difference.


We need put an end to the oligarchy FIRST. We need to agree to disagree on everything else. We can work out the rest of our differences later.


No... this "revolution" is over. Progressives killed it. I'm going back to the Libertarians for now.


In the meantime enjoy getting nothing done.

So...
I decided to enjoy my success from halfway down.

It was still very grand
And it didn't smell so much like dead monkey.
Posted by Urk at 8:59 PM No comments: